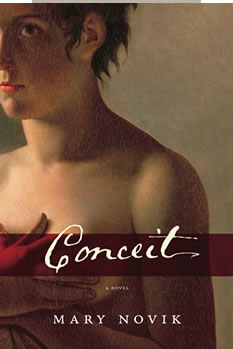 Conceit by Mary Novik is a fictional novel that takes place in 17th-century London during the time of John Donne. The novel follows the story of Donne’s daughter, Pegge, as it explores the magnificent yet lewd poetry of “Jack” Donne and his life afterwards. It is narrated by Pegge but also interrupted by both John Donne, and his dead wife, Ann More. Mary Novik is a local writer, born in Victoria and now living in North Vancouver.

Set against the lively backdrop of seventeenth-century England, from Elizabeth I’s court to the teeming, bawdy streets of Restoration London, this audacious debut novel vividly portrays the lives of men and women driven by passion.

Pegge Donne is still a rebellious girl, barely in her teens and already too clever for a world that values learning only in men, when her father, the famous poet John Donne, begins arranging marriages for his five daughters—including Pegge.

Pegge, however, is desperate to experience the all-consuming passion that led to her parents’ clandestine elopement. She sets out to win the love of Donne’s friend, Izaak Walton, and tries to draw the secrets of desire out of her father during his final days.

Intertwined with Pegge’s singular voice are those of John Donne and Ann More, each telling their own story of a love that swept all before it. Exquisitely written, Conceit is seductive, elegant, and richly satisfying.

My first impression, while reading the first few pages, was: “I’ve read this before!” I kept reading (to confirm or deny) and suddenly realized why this opening account of The Great Fire of London from the perspective of Samual Pepys sounded so familiar; we read The Diary of Samuel Pepys in English Literature 12. Once the scene was vividly set—as one would hope while based on a primary document—we were introduced to Pegge, our main character.

The style of this book was refreshing. I can’t quite decide if it is non-linear or linear… it follows Pegge’s life, but begins at the end, and is interrupted by both her dead mother and dying father regarding their relationship and life together. It’s definitely an interesting read, and it totally refreshed my perspective of the day — the language is fitting, yet does not alienate the reader or make you stumble over confusing passages.

What really added to my enjoyment of this book is the fact that I have studied this period of literature before, and read a number of John Donne’s poems — including the elusive “The Flea” — and I enjoyed flicking back through my poetry book and catching some references perfectly placed within the text of the novel. It was very well written.

This book is available July 29, 2008 and I would recommend it for adults.

Full disclosure: I received this book through the Mini Book Expo for Bloggers.