Attack of the Knitting Mojo

Since the summer, I seem to have been (re)bitten by the knitting bug. Here is an account of my progress.

After knitting most of the year on and off on this cowl with lovely silk yarn that Chelle gave me, I can proudly say I finished.

At the end of August I was finally nearing the end of the skein and decided to cast off. The yarn, Blue Moon Fibre Arts, was absolutely a dream to knit with, but I was bored with the pattern. I had been considering knitting Lapse of Reason, but thought that the silk would be too drapey, so I ended up just improvising a cowl.

I cast on approximately 120 stitches (I think), joined in the round, and then did a 4-row Feather & Fan repeat. I simply kept knitting until I got bored (9 repeats) and then knit stockinette until I thought I had a nice centre (approx. 4 inches), and repeated the Feather & Fan stitches until I ran out of yarn (11 repeats).

Next, I dug out a lovely ball of Malabrigo because I wanted to knit something quick, easy, and squidgey. I needed some instant gratification after the long-lingering silk cowl. I settled on the Herringbone Neck Warmer, a free pattern by Craig Rosenfeld.

Then there was a secret project that I can’t tell you about yet.

And then I decided I wanted a simple shawl. I’ve been meaning to knit Darcy’s “Choose Your Own Ending” shawl. So I pulled out a ball of Madeline Tosh Sock that I’ve had for a while and cast on. 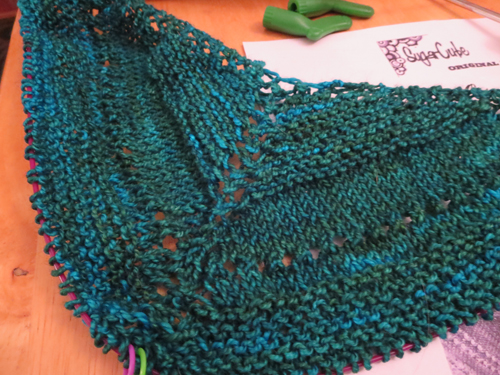 The pattern is great for TV knitting (I’ve been blasting through the first four seasons of Castle), but I didn’t like how the Tosh looked in the pattern. Darcy (aka Sugar Cube Original Designs) created the pattern with a variegated yarn in mind, and it really doesn’t work for a semi-solid in the same way.

So I ripped it out and cast on instead for the Lingonberry Shawl.

I have sped through the pattern, but barely made a dent in the yarn. I’m going to try and figure out how to repeat some of the charts (A, B, or C) before finishing the edging.